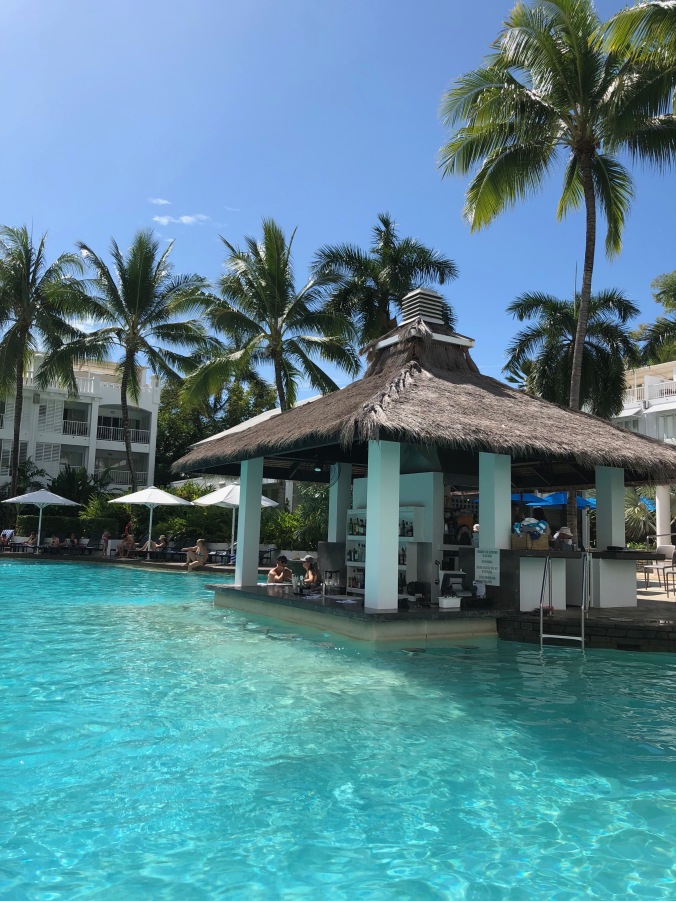 65 days into this alcohol free journey – or AF as they say in the sober circles. Although it’s not really a count down to 100 days anymore. Not drinking booze has become my new normal, and not a struggle most of the time. The days are tallied up on an app that I go into now and then out of curiosity, and when people ask, which they do quite often.

I passed the half way mark while we were on holidays. The three of us went to Palm Cove in Far North Queensland to escape the Southern Highlands winter for a week. It was one of those lay around the pool holidays, at a naff but lovely resort with a huge pool full of kids (school holidays), a swim up bar and a bar tab that you avoid thinking about until the last day.

What else is there to do but to drink from midday, right? A beer or 2 with lunch, cocktails at the swim up bar, pre-dinner drinks, wine with dinner. Usually I’d cruise through those holidays in an alcohol haze, not really getting drunk, just kind of slow  – until the evening when it would be revved up a notch. Head to bed by 10 or 11, wake up the next day and do it all again. By the end of the week, I’m feeling properly pickled and in need of a detox.

But not this time! I’d be lying if I said I wasn’t tempted. Normally I do love a beer (or 5) by a resort pool in the warm sun, and hey I’m on holidays aren’t I? Surely hitting the pause button on the 100 days was acceptable.

But then I used a technique I learnt in one of the “quit lit” books I’ve read: I played it out in my head. What would having a beer by the pool mean? It’d certainly mean I’d have another. And then that would certainly mean I’d have (or want) another. I’d have to slow down there, as it’s day time and I still have an 8 year old to be a parent to, so there’s no sitting at the bar getting on it in party mode like the old, single days.

So I’d slow down or stop and start to feel yuck – that tired, hazy, headachy feeling you get when you have a few drinks in the day then stop. It kind of makes the rest of the day a big effort, until starting again with pre-dinner drinks, all the while feeling foggy until that first drink kicks in and gives you a lift again. Of course, then, there’s the next day. The hangovers are probably reasonably mild, and all over after a good breakfast, but since I’d given myself permission to drink the previous day, I would do so again, and everyday it gets a little worse, getting tireder every day, eating more and more and go home 2kgs heavier and feeling like crap.

So I didn’t! I recognised the thoughts for what they were – conditioned responses. Of course the thought of a beer by the pool popped into my head! My brain has 30 years of conditioning to think that way! I brushed the thought away and ordered a Coke Zero instead. It will take a long time for those conditioned responses to go away (assuming of course that I continue with this experiment) but my training has begun. One night, the barman forgot the “virgin” part of Virgin Mojito, but I tasted it on the first sip and sent it back without an issue, no temptation to secretly drink it, what would be the point of that.

Did I enjoy the holiday? Damn right I did! I went to the gym a few times, and did a 5km run and felt great. I enjoyed the meals but made good choices so didn’t come home heavier. I felt cheerful and relaxed and present for the whole time. We were in bed by 9.30, when I took my iPad and headphones and binge watched Season 2 of Unreal on Stan (a big disappointment after Season 1) using the hotel wifi. Heaven!

I’m sure if we went with a bunch of friends, it would have been more like party time and quite different, harder certainly, but for a family holiday, alcohol free is a winner.

The biggest issues were the mocktails. Firstly, my virgin mojito cost around $10 in most places. WTF?? I Googled the recipe: it’s soda water, fresh lime, sugar and mint leaves. WHAT A RORT! Secondly, Miss 8 acquired a taste for them and lost interest in her $3 Sprite. As soon as mine hit the table, she was into it and downed half of it before I even knew it had been delivered to the table. By the end, she was ordering them for herself. Yeah… no. $10 drinks for an 8 year old? I think not.

I'm Alex, or Lexy. An ex Sydney corporate girl now tree-changer, FIFO wife, working mum and allergy mum. I hate craft, am an average cook and very poor gardener. I love my family and friends, drink way too much wine and am cursed with an inability to lie successfully. Oh, by "FIFO" I mean my husband flies away every Monday morning and returns every Friday evening, but he's not FIFO in the traditional, mining way. He works in infrastructure. Apparently that's important to clarify...